Owning a home is a great investment. In order to keep it in pristine condition for years to come, maintenance must be a top priority, especially when it comes to your roof. When you hire a professional roofing company in Queens, NY, like our team, you can expect to receive quality craftsmanship and high-end results.

Roof Leak Enders is a fully licensed & insured roofing company with over 15 years of experience. We have helped thousands of customers with their roofing repair and installation jobs. We are proud to service residential and commercial customers in Queens with our new roof installation, complete roof replacement, roof leak detection, and roof leak repair service.

Types of Homes We Service

Avoid trying to climb your roof to attempt to fix it on your own. This is not only dangerous, if you are not a skilled roofer, you could cause costly damage to your roof. Instead, hire a reputable, licensed roofing contractor in Queens, to perform roof leak repair and maintenance work. 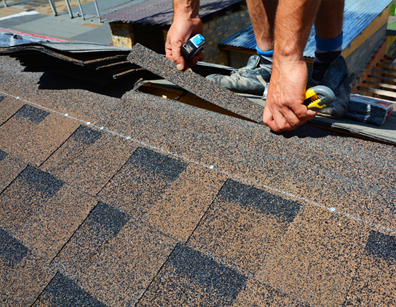 Do you need your roof repaired or a new roof installed? If yes, call 516-620-4575 or contact us to schedule your estimate.

What Are The Most Common Roof Problems Homeowners Encounter?

Here are a few of the top roofing problems that Queens residents and business owners face:

Ignoring or missing a small amount of roof deterioration at the beginning stages. This is why we recommend regular roofing maintenance to help prevent major roofing problems in the future.

Hurricanes, mild tropical storms, heavy rain, and strong winds can cause damage to your flashing and roof shingles. Lifting or missing can also lead to roof leaks.

Flashings are the roof’s most vulnerable part. They provide water-tight junctions between roofing materials and roof projections or sections. Flashing issues lead to many roof problems and the result in leaks.

The most robust roofing materials can deteriorate from salts in the air, exposure to weather, and contaminants.

An example of this would be a lack of proper drainage, sagging or soft roofing structure.

Are you concerned about the condition of your roof? Call 516-620-4575 or contact us to schedule your estimate.

Types of Roofing We Repair 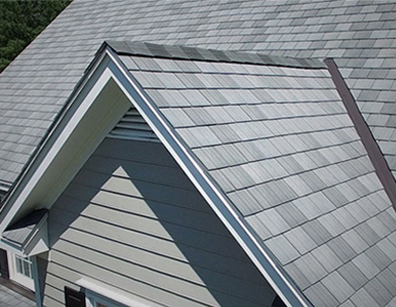 We install, replace, repair, flash and seal every type of asphalt shingle roof.

We are experts when it comes to flat roof membranes.  We repair, install & seal flat roofs for both residential and commercial roofs.

Do you have a Slate tile, Spanish tile, or even a Cedar Shake? We have the skills to make repairs and to install a completely new tile roof.

Our team is experienced in copper and standing seam aluminum work. We also specialize in custom work. We make custom bends of aluminum and copper around trim capping, inside of Yankee Gutters and above doors.

We also do Spanish Tile Roofing and Terra-Cotta Roofs.

It doesn’t matter what type of roof your Queens home or business has, we can help. Call 516-620-4575 or contact us to schedule your roof evaluation.

In addition, we handle roof emergencies and we conduct roof inspections and evaluations at reasonable rates.

How do you know if there’s a roof leak?

Here are a few signs that you may have a leaky roof problem:

If mold or green moss is growing on your external walls, there is moisture build-up on your roof.  This is a sign of a leaky roof.

What to do when you have a leak in your roof?

If you have a leaky roof, you will want to call a professional roofing company right away. One of the biggest mistakes homeowners make is ignoring the problem. Ignoring a leaky roof will only result in costly repairs in the long run.

A leaky roof can take as little as 30 min to an hour, depending on the extent of the damage. 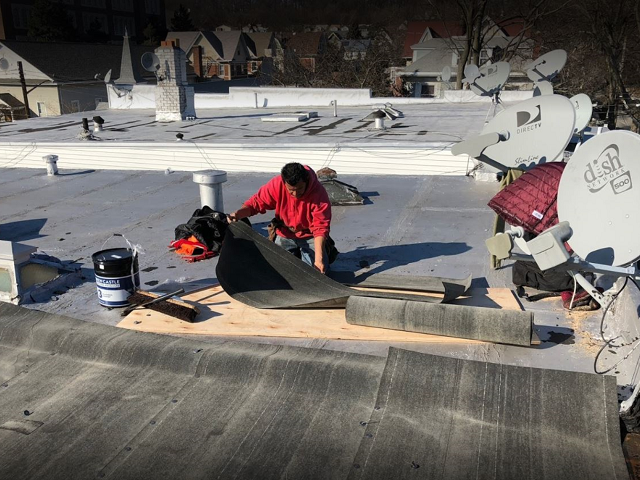 Within the last year, Roof Leak Enders completed a job in Forest Hills, which is located in Queens County, New York. The customer reported that the flat roof over the sunroom in had an ongoing roof leak. Our project manager evaluated the job and located the source of the leak as coming from the seams in the flat roof. The flat roof was not pitched correctly and rain water was pooling on the flat roof causing the roofing membrane to crack and erode.

In addition, our project manager noticed that the flat roof railing fence was damaged. In many cases, we will attempt to seal the damaged area, but in this case the roof was too far gone and it was determined that a new roof was necessary. Our technicians first addressed the improper pitch of the flat roof by building up the flat roof with insulation material. We then installed new plywood over the insulation and installed a new flat roof membrane. All of the flashing was replaced with new copper flashing so that the water would properly drain from the flat roof and into the gutter and not behind the gutter and back into the house. At this point we made repairs to the roof railing and replaced certain sections. In the section where the roof met the wall of the existing house, we cut in new copper flashing and flashed the flat roof to the house itself. The leak was solved and the roof work was guaranteed.

Approximately six months ago, a customer from Astoria in Queens County, New York called for us to evaluate a roof leak. The home had a pitched roof with asphalt shingles. As is typical in some of these cases, the homeowner was reporting that the roof leak was not always occurring but only during certain weather patterns. We dispatched a two-man crew to water test the roof. We occasionally water test roofs when the immediate source of a roof leak is not readily identifiable. In this case, it became pretty clear that the source of the roof leak was the plumbing vent pipe that was projecting through the roof. Plumbing roof pipes or plumbing roof vents as they are known, are a common source of roof leaks in Queens County, New York. The solution to this problem was to remove the “boot” or rubber membrane that is meant to provide waterproof protection and replace the rubber boot. We then conducted a follow up water test and confirmed that this was the source of the leak. Many roof problems are not this simple; however, this roof leak solution provided a quick and easy fix to a roof leak in Astoria!

Last year, we did a job for a homeowner located in the Flushing Whitestone section of Queens, NY. They had a persistent roof leak problem that was ongoing over several months. The homeowner told us that they had numerous roofing companies in Queens that were not specialized in roof leaks to evaluate the roof.

Our project manager and service technicians went out and evaluated the job. After careful inspection, we determined that the roof was leaking because the gutters were filling with rain water and backing up behind the fascia board into the attic space and down into the customers bedroom. The other roofing teams did not take the time to inspect the gutters and downspouts and were simply looking at the roofing. All of the downspouts on the one side of the house that was experiencing the roof leak, were fully and totally blocked with debris. Our technicians flushed and snaked out all the downspouts and cleaned them thoroughly. They were required to disassemble certain sections of downspout or leader and immediately alleviated the problem. As a secondary measure, we recommended the installation of gutter guards for this house in Queens, New York. The gutter guards will ensure that no debris will gain entry into the gutter or downspout again. Another happy customer!

A longtime customer had a tree damage the roof valley of her home in South Ozone Park, New York, causing a prominent roof leak. Upon getting up on the roof, it was immediately clear that the valley, where two sections of roof meet was severely damaged from falling branches. We removed all the debris from the roof, and opened up the section that was damaged in the roof valley. Our team, installed new water and ice shield after replacing the damage sections of plywood underlayment. The technicians then installed new asphalt shingles and new flashing in the roof valley. The life of this roof was preserved by several decades by making this roof repair in Queens, NY.

In Jamaica, New York, we I had a common roof leak job: a leaking skylight. Unfortunately, skylights are a frequent source of roof leaks. In many cases, depending on the age and condition of the skylight, it requires us to remove the old skylight and install a new one with new roofing and flashing to waterproof it. However, in this case, the skylight was in excellent condition and the roof was fairly new. We determine that the best solution would be to open the roof area surrounding the skylight. After doing that, we noticed a lot of water marks and rusty nails. These are clear telltale signs of water penetration where it should not be, resulting from faulty workmanship.  We removed further around the leaking section until we stopped seeing signs of water damage, installed new flashing and new water and ice shield. We then re-shingled the section of roof surrounding the skylight and the leak was eliminated.

If you suspect you have roofing problems, please call us today at 516-620-4575 and we will evaluate your roof as well as provide you an estimate.

How long will my roof last if I decide to replace it with you guys?

It all depends on the type of roof you have. For example, metal roofs tend to last 30 to 70 years. However, Asphalt shingle roofs last between 20 to 30 years.

Is it time for my roof to be repaired?

If your home is 20+ years old, it may be time for a roof replacement. You can usually tell when you begin to notice the following changes: missing shingles, leaks, mold, bald spots, or internal water damage.

To know for sure, call a professional roofing contractor in Queens.

My roof started leaking, does that mean I need to replace the entire roof with a new one?

We will need to find out exactly why your roof is leaking. For example, if you have one missing shingle, you may just need repair work. The best way to find out for sure is to have a professional take a look at it to see how much damage has been done to your roof. Then we will determine whether you need roof repair or a full replacement.

My shingles look discolored and faded. Is that caused by the sun?

More than likely if you are seeing faded or discolored shingles, it can be caused by mold, fungus, or algae. You can expect this to happen when you live in a humid climate like New York.

I need my roof replaced. How long will it take?

The amount of time that it will take to replace a roof all depends on the size of the building or house. Normally, it takes a single day to replace a roof. For commercial buildings, it can take longer. Our team is fast, efficient, and thorough. We work as quickly as possible to ensure your life is less impacted as possible.

Queens is known as one of the 5 boroughs in New York City. It is home to the LaGuardia Airport and JFK International Airport.

Queens Museum is another popular landmark. It is known for the “Panorama,” a unique model of NYC.

Queens has a total of 91 neighborhoods.